This is a series of posts about how to create custom transition “views” using the Transitioner in React Navigation (based on “NavigationExperiemental”):

In the last couple of posts, we’ve learned about how Transitioner/CardStack works and how to create simple transitions by interpolating AnimatedValues that the Transitioner creates. Now, let’s try something fancier - shared element transition:

This neat transition was inspired by the example in the Material design guideline. We’ll look at an initial implementation which, of course, leaves plenty of room for improvements. And there might be much better approaches. But I think the main points learned via this excise should be useful elsewhere. If you prefer, feel free to dive into the source code, play with it and come back as needed.

Taking on it as a personal challenge, I set the following goals before coding:

OK, it’s now time to look closely at the animation that we want to create. There are a number of things happening during the 300ms transition window: 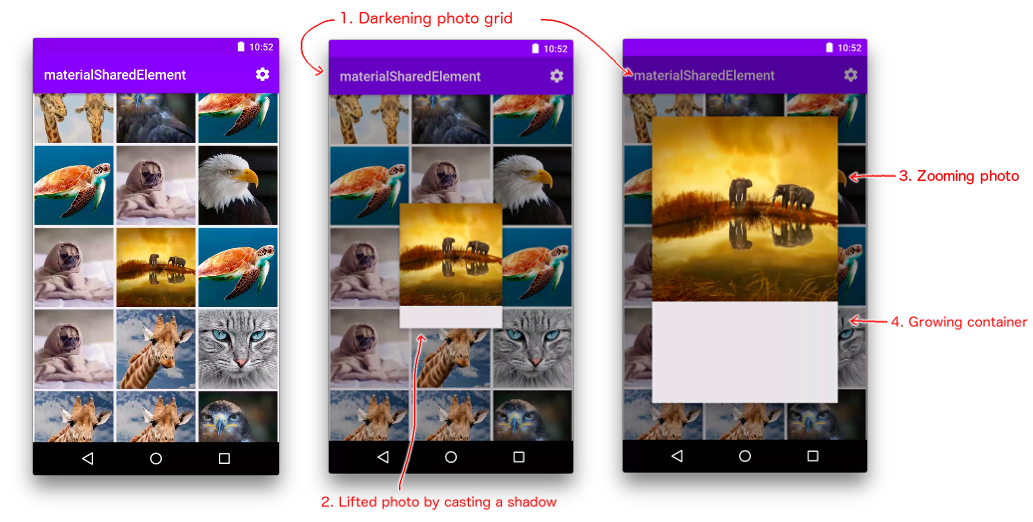 The most interesting part is the No.3 above which creates an effect that the photo jumps out of the grid and expands itself into the detail scene. We’ll devote most of this post to how it works.

Do you really believe that there is a single image being shared between the grid and detail screens?

Let’s reveal the magic trick! The truth: nothing is shared and there is still a separate image on each scene. Most of the animation happens on an extra overlay visible only during the transition. BTW: It’s in fact very difficult, if not impossible, to share a view across different parts in a component hierarchy in React.

Sounds straightforward to implement, right? I thought so in the beginning, however, I had to go through a few iterations to do it properly in the React way, and the asynchronous nature of React Native presents some unique challenges.

Let’s just start coding and see how far we could go.

Still remember how to use Transitioner? Our SharedElementsTransitioner just renders to a Transitioner and defines its _render function like so:

The _render function is almost the same as that of CardStack except for the additional overlay where most of the animations take place.

The _renderOverlay function should be straightforward too. We just render all the shared views there:

We’ll leave the discussion about this cloneAndAnimateSharedViews method to the next post (as it’s a long discussion).

In order to ensure the overlay to be visible only during transition, we can use the “0.99-cliff” trick discussed in the previous post:

Here we chose to animate left instead of opacity to prevent the overlay from blocking touch events.

OK, let’s take a break for now. We have discussed a high-level plan on how the shared element transition might work: the overlay is the key to create the shared element effect. We also covered some simpler aspects in its implementation: the render* methods, and how to show/hide scenes and the overlay at the right times.

In the next post, we’ll look into how to actually animate the shared views on the overlay. Bear with me, the fun is still ahead!